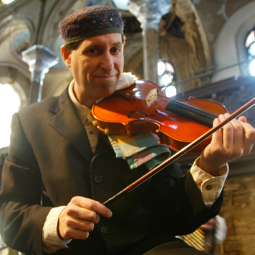 Artist in Residence Yale Strom is in production on his tenth documentary film, "Recordially Yours: The Life and Music of Lou Curtiss." His previous film, "American Socialist: The Life and Times Eugene Victor Debs", was released in 2018 and is distributed by First Run Features. Strom also is writing and editing a chapter in "Our Musical World (Vision and Vibrations International 2020) about the relationship between klezmer and Roma music in Eastern Europe. His sixteenth recording "Yale Strom's Broken Consort: Shimmering Lights" came out in October (2018) on the ARC Music UK label. Strom arranged  and wrote original Khanuka songs from Morocco to Poland to Israel to Turkey and beyond. Along with his regular bandmates, Strom's consort includes world renowned musicians Amos Hoffman (oud-guitar), David Wallace (viola) and Sara Caswell (violin). The band performed in 2019 at the Intermezzo Klezmer Festival in Furth, Germany. This year, Strom was commissioned by the San Diego Ballet to compose a piece for the poetry "Song of Songs."  Strom has been invited by the Jewish Museum of Prague to help commemorate the 30th anniversary of the Velvet Revolution this November of 2019. His photo exhibition "Fragments: Jewish Life in Eastern Europe 1981-2007" will be exhibited, and Strom will screen his first film, "At the Crossroads: Jewish Life in Eastern Europe Today" (1990) and perform in the famed Maisel Synagogue. Lastly Strom along with Elizabeth Schwartz recorded the Yiddish song "Raisins and Almonds" for the new children's illustrated book Raisins and Almonds by Susan Tarcov (pub. Kar-Ben 2019) and Strom is working on a radio-audio drama "Prisoner 9653: Eugene Victor Debs" with award-winning director Sue Zizza that will premiere in 2020.